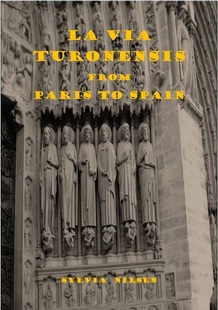 LA VIA TOURONENSIS - FROM PARIS TO SPAIN

This book is about my 1,000 kilometer walk on the Chemin de Tours or Via Turonensis, starting in Paris and walking from Orleans to Roncesvalles in Spain.
LA VIA TOURNENSIS is the ancient road to Spain from Paris, once the busiest pilgrimage trail to Santiago in Spain.

Having walked the Camino Frances from Roncesvalles, I wanted to walk the medieval route from Paris to Spain as part of the research for my historical  novel, “Pilgrim Footprints on the Sands of Time” a story about medieval pilgrims  from England who are sent on a penitential pilgrimage to the tomb of St James  the Greater in the city in Spain named after him – Sant’Iago de Compostela.

Also in the series, Pilgrimage Trails