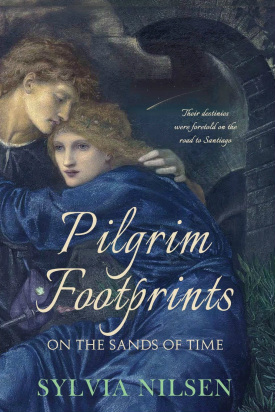 PILGRIM FOOTPRINTS on the Sands of Time
ASIN: B008GJTHCE  (DIGITAL)​


In the Middle Ages millions of faithful risked long and dangerous journeys to shrines scattered across the Christian world in order to earn indulgences for remission of sins and time spent in purgatory. These included Kings and paupers, Knights and vagabonds. The church imposed penitential pilgrimage on criminals and wrong-doers.
Set in the turbulent 12th century, King Henry clashed with the church in his attempts to exert Royal authority in England resulting in a murder that had far reaching consequences beyond the borders of the realm
After Richard FitzUrse and his knights murdered Thomas Becket in Canterbury Cathedral, Lord and Lady FitzUrse are instructed by the King to make a pilgrimage to the tomb of St James the Greater in Spain in order to restore the family name .
William Beaumont, a young healer who is in love with Alicia, niece of Lady FitzUrse, is overjoyed when he is asked to accompany the family and their servants on this journey.
They face many hardships, dangers, an attempted murder and intrigue on their way to Santiago de Compostela.  What
does the gypsy woman they meet in Paris mean when she predicts that Alicia and William are soul mates but are only meant to be together when the water carrier rises over the horizon? Who is trying to kill Sir Robert and Alicia?
One fateful night, a shocking event changes their lives forever.
This is story of blind faith, superstition, love, sacrifice, adventure and intrigue.
BUY BOOK