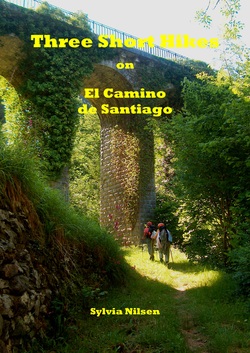 Hundreds of books have been written about the popular Camino Frances pilgrimage route in the north of Spain to Santiago de Compostela.  A few books have been written about the Via de la Plata – the so called Silver Route – from Seville in the south to Santiago. Very little has been written or published about some of the less travelled routes in France and Spain.
In Three Short Hikes on el Camino de Santiago Sylvia Nilsen writes about her hikes on:
The Camino Aragones in the north-east of Spain,
The Camino Ingles in the north-west
The route to Finisterre, end of the world.
Sylvia started her hike on the Camino Aragones in the pilgrimage town of Lourdes in the south of France and finished in Pamplona in Spain.
The Camino Ingles was a route used by seafaring pilgrims from the north with hundreds of ships landed at A Coruna or el Ferrol on the north coast of Spain. Sylvia followed this route from el Ferrol to the Cathedral city to visit the shrine of St James.
The trail from Santiago to Finisterre – end of the earth – was popular with pilgrims from the Iberian Peninsula and other European countries. The Costa da Morte – Coast of Death – was the end of the known world in the middle ages, the mythical Milky Way.
Today, as in the past, Sylvia walked beyond the tomb of the saint to the ends of the earth at Finisterre.
She also gives us an insight into the work of a voluntary ‘hospitalera’ (warden) in a pilgrim shelter in San Roque outside
Corcubion, on the way to Finisterre.