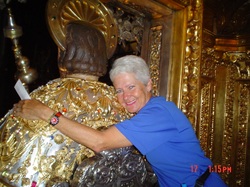 Sylvia Nilsen, well-known in the Camino world for her Camino blog amaWalker.blogspot.com and as ‘Sillydoll’ on the Camino forums, is a South African freelance writer who has been published in numerous local and international publications.
She worked as a research agent and editor for a UK based travel guide publisher and produced several African city and country guides.
She has walked over 4000km of Camino trails including Paris to Spain, the Camino Frances from Roncesvalles to Santiago (twice), from Lourdes to Pamplona, el Ferrol to Santiago, Santiago to Finisterre and from Switzerland to Rome on the Via Francigena.  Founder of amaWalkersCamino (Pty) Ltd, she leads small groups of pilgrims on the Camino Frances.
Sylvia  has served as a volunteer hospitalero in Spain and as the only Spanish accredited Hospitalero Voluntarios trainer in South Africa has trained 43 new volunteer hospitaleros (wardens).
She was the Regional Coordinator for the Confraternity of St James in South Africa from 2003 to 2010.
Sylvia’s passion and knowledge of all things Camino shine through in this book. 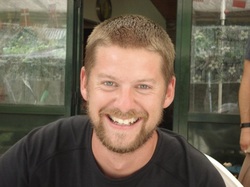 Greg Dedman, from Letchworth Garden City, UK, has compiled and
translated several free Camino guides from Spanish sources. In 2001 he solo backpacked Western Europe and became a moderator and backpacker adviser on www.bug.co.uk, returning to Switzerland several
times a year to lead informal hikes in the Alps.
In 2007 he walked the Camino Frances and worked in the Italian Dolomite Mountains as a hike leader.
From Italy, he went to Canada to work as a snowshoe guide, then back to Italy for a year of hike, ski and snowshoe guiding.  He then moved to Tuscany, Italy working as a walk and cycle trip organiser.
In 2010 he walked the Camino Frances in autumn and winter. Greg didn’t hesitate to accept Sylvia’s invitation to collaborate on this planning guide and has contributed chapters on
technology, weather, food and language. 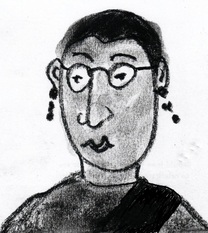 Reinette Novóa was born in Pretoria, South Africa.
She was married to Uruguayan diplomat Xavier Nóvoa García who was from an old Galician family in Spain. Brother of international Galician artist Leopoldo Nóvoa García, they are direct descendants of João da Nóvoa who sailed with Vasco da Gama round the Cape of Good Hope to India in 1498.
After her husband's death in 1998, she became Uruguayan Honorary Consul in Durban, a position she held until 2007.
Reinette speaks five languages, Afrikaans, English, French and Spanish and is a Spanish teacher and translator. 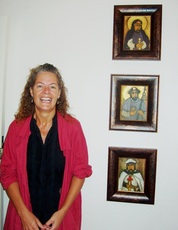 Sandi Beukes with her Santiago collection.  She has done over 150 drawings for  YOUR CAMINO and CAMINO LINGO.

Sandi was born in Cape Town in 1957. She qualified as a Chartered Accountant in 1983 and worked in the industry until 2000, when she became a fulltime artist.
Sandi started painting watercolours in 1984, and then moved into pastels in 1996 and acrylics in 2002.   She travels fairly frequently to Europe to visit art museums and get ideas for paintings. She particularly loves the French and Italian countryside, as well as French café life.   Her main subject matter includes landscapes, waterscapes, street scenes, dance halls, musicians, cardplayers and stylized portraits of people sitting in cafes.   She finds much inspiration in the old masters, especially from the artists living in Paris from the late 1800’s until around 1920. Favourites include Modigliani, Degas, Toulouse-Lautrec, Utrillo, van Gogh, Cezanne, Soutine, Pissarro, Daumier and the early work of Picasso, to name but a few.
Sandi has been taking Russian lessons for almost two years and hopes to travel across Russia, sketching Russian country life for future paintings.
From:  http://www.artpro.co.za/artists1.aspx?artid=11
http://www.butterflies.co.za/Art%20Gallery/Beukes%20Sandi.htm